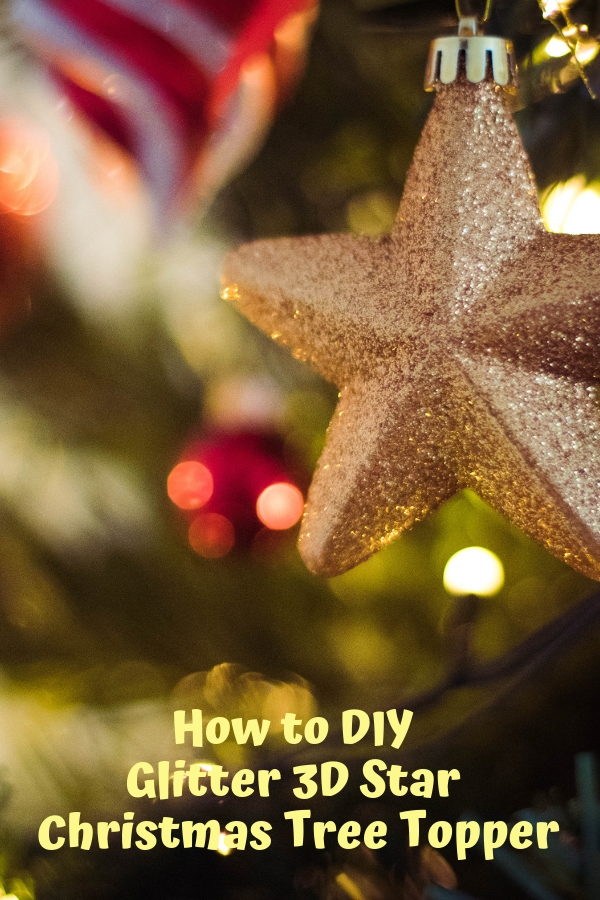 We are setting the Xmas tree this afternoon and found that the Santa Christmas tree topper which we used last year being broken. We suspected part of it crushed after we accidentally fall it on fall while unpacking those ornaments.

My son suggested making a simple one with star shape as a replacement. He then goes ahead to browse YouTube in order to get some inspiration on how to DIY glitter 3D star as a Christmas tree topper. He was happy to found the following video and follow the steps to make one for us to complete our Xmas tree decoration.

1. Fold one of the stock papers in half then use the handle of the scissor to re-enforce the folded part.
2. Fold the paper diagonally from the top to bottom and then the bottom to the top then open it up again (do not re-enforce the folded parts).
3. Now you have an “X”. Imagine there is a dot in the middle of the “X” and then fold the other side of the paper all the way until the middle of the “X”.
4. Then you’re going to take the edge and fold it back on itself. Then bring the other side in.
5. After that, what you want to do is to fold them on the back. Then you will be able to see three lines, take the third line and cut along. (you can cut it a bit steeper)
6. Now unfold it. Then squeeze it down. After you squeeze it down, try and re-enforce it. Then take another stock paper and put it under your star.
7. After that, you want to try and play around with the star (push it up or down to get the right shape you want). Once it’s alright then trace the star and remember to label the top of the star.
8. Then cut out the shape of the star but leave about a centimeter extra then cut a little bit so you can fold it easily. Then fold it all back along the lines you drew.
9. Once it’s fully done take the first star and tuck it in. Then you want to cut off the edges so it doesn’t stick out. Next, find a hole for the Christmas tree, trace it, and then cut it out.
10. Then use the scotch tape and stick everything together. And now your objective is to make it more resistant. So now you will have to take a magazine and a ruler then you want to cut off a few strips.
11. After that, you want to leave it aside for a second and take the glue you have and mix it with water. Then put the glue on the stripes. Then put the strips all over your star. (You don’t have to put it entirely around your star).
12. After you do that, take your spray paint and put the cardboard underneath the star. Once you have that done you can spray it all over your star.
13. Then you want to wait 15 minutes and then put the last bit of touch up with the spray paint. Then once that has dried up spray paint the back of the star.
14. After everything has dried up, take the glue, paintbrush, and cardboard. Put the star on top of the cardboard again but this time you want to use the paintbrush and paint half the star with glue.
15. Once you finish that, take the glitter and then try and sprinkle some glitter on half the star.
16. Then what you want to do with the other half of the star is basically do the exact same thing.


It actually is a simple art project although it seems involved a lot of steps. The challenging part is folding origami to make turns a paper into a star shape. And just be patient to wait until it dries off after apply spray paint.

My son very satisfied with his artwork and extremely happy when the 3D star is on top of our Xmas tree. You too can give it a try and paint it with your favorite color if you're looking for a budget Christmas tree topper.