If you find that a life-size fake casket may make kids have a nightmare, then this 6ft black coffin with the rising Dracula Vampire inflatable Halloween prop is an ideal replacement. 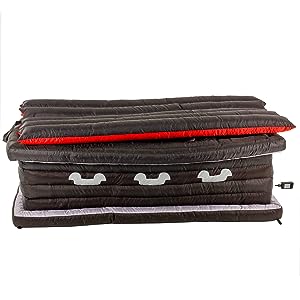 Don’t go away after seeing its boring appearance. Be patient and explore its highlight features.

First of all, it does not attract people’s attention with its outward appearance.

It does not even come with an iconic Halloween symbol such as a pumpkin head. Furthermore, it does not look as creepy as the majority of life-size animated Halloween props.

Without further delay, watch the following video then you’ll know what is its major feature to attract the trick-or-treaters.

Got it? Yes, there is a vampire inside the fake casket. It up and down as the casket lid opens.

With its white LED lights feature, it is an ideal pick for yard decoration. It boosts the ghoulish spirit, especially at night.