If you’re looking something that looks swooping down from the corner of a room to boost creepy ambience, then this white shake wing flying skull Halloween prop is the ideal pick. 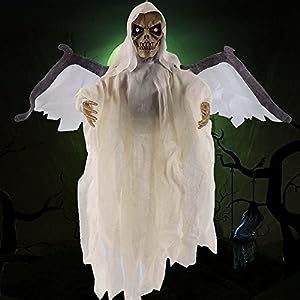 It is frightening people, especially in a dimly lit room. It not only scares people with its creepy appearance but also its creepy voice.

As the product title implies, it features glowing red eyes while it is shaking its wings. This horror feature makes it become a chilling piece.

I know it is hard to imagine so-called scary voice. Let’s click the play button and watch the video below.

By the way, this animated Halloween prop needs three pieces of AAA battery to operate. So get ready and let it performs its tasks to frighten your guests.